Proving your brother isn’t a motorcycle thief  is tough when he’s been caught on a stolen bike. 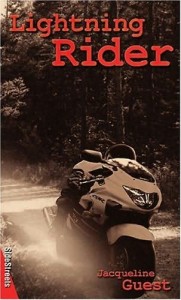 January Fournier, a sixteen-year-old Métis girl, learns her brother is in intensive care after a motorcycle crash.  When she arrives at the hospital, the police tell her the crashed bike was stolen, and her brother is now the prime suspect in a series of local bike thefts.

Convinced the police are wrong, Jan sets out to uncover the truth.  But her attempts to track down the real thief are blocked by a police officer who wants her brother convicted.  Before Jan can solve the mystery, she must push herself and her own bike to the edge of disaster.